On April 23, 1942, in an ancient Nair tharavadu (family) having Vaidya Tradition, in Kollencode Desham which belonged to the olden State of Travancore, Shri. Ramachandran Nair Gurukkal was born. His affinity towards martial arts influenced him to start learning and practicing Kalaripayattu at a very young age of 16 under several renowned masters. He learned different Southern and Northern style of Kalari from the doyens of Kalaripayattu like Shri.Velayudhan Nair Gurukkal, Shri. C.V.Govindankutty Gurukkal and Shri.Shali Ashan. He was also trained under the watchful eyes of Shri.C.V.Balan Nair, the brother of Veerashri C.V.Narayanan Nair belonging to the famous Kalaripayattu tradition propagated by the famous master Kottakkal Kanaaran Gurukkal. The sheer dedication and commitment of Ramachandran Nair has made him the prime student of all his teachers.

Gurukkal’s expertise also extended to the treatment of ailments through Ayurveda, Siddha and Marma Chikitsa. Shri.Ramachandran Gurukkal acquired the knowledge of Agastya Sasthram, of Siddha medicine; he also mastered the preparation of rare and authentic medicines with natural herbs and minerals. Gurukkal through dedicated practice of Kalaripayattu and traversing through the different levels of the art reached the apex and skillfully mastered the science of Marma chikitsa. In his life as a traditional medical practitioner he played an instrumental role in treating ailments from the patients who approached him over his life time. Before Gurukkal bid adieu to the worldly existence, he passed on the Kalaripayattu tradition and treatments along with the reins of C.V.N.Madhava Matam Kalari to the able hands of Dr.Gowthaman and Dr.Priyanka. 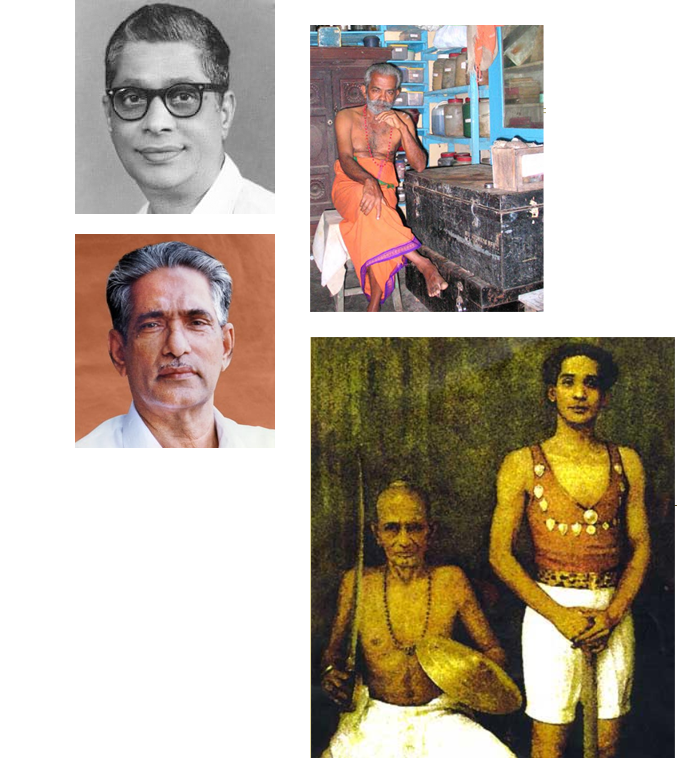 Dr.Gowthaman, who is a practicing Ayurveda doctor, pursued MD in Rasasastra/Rasachikitsa for the accentuation of his knowledge in Ayurveda. Dr. Gowthaman was initiated in the world of Kalaripayattu by his father the very young age of 7. Towing his father he learned the different nuances of Kalaripayattu and Ayurveda-Siddha systems of medicine. He continues to upgrade himself towards the hidden vistas of Indian Medicine. Now C.V.N Kalari, Madhava Matam continues to uphold the legacy of Ramachandran Gurukkal through Gowthaman Gurukkal. Dr.Gowthaman gets invited for talks, workshops and performances by various authorities inside and outside country.

Dr. Priyanka(wife of Dr.Gowthaman), who is a practicing Ayurveda doctor herself, belongs to a Traditional Vaidya family in Palakkad. Later she gets trained under Shri.Ramachandran Gurukkal in the field of Marma Chikitsa. She pursued her MD in Swasthavritta & Yoga, later incorporated the systems Marma chikitsa, Ayurveda and Yoga for establishing a holistic approach in treatment. Dr.Priyanka was university rank holder during her under-graduation and post-graduation.